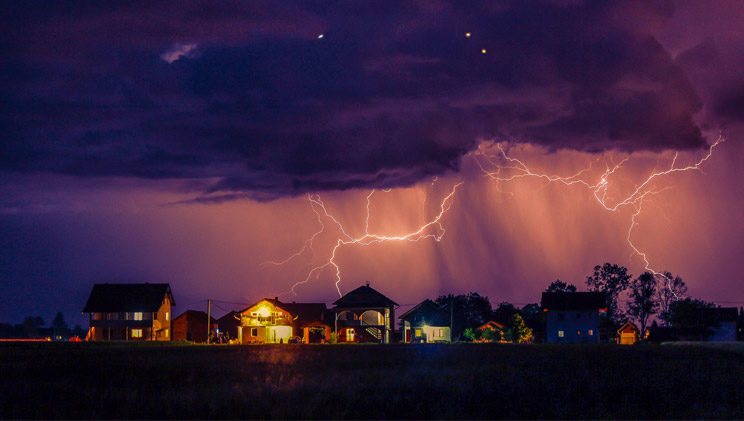 Did you know that the average lightning bolt has about 300 million volts and 30,000 amps of electricity? That’s enough to light a 100-watt incandescent light bulb for three months.

Electrical Surges and Your Appliances

What happens when lightning hits a power line, and the surge enters your house? The resulting electrical surge could damage your major appliances such as your refrigerator, washing machine, dryer, air conditioner, and electronics. Possibly beyond repair. Your appliance warranty might not cover the damage.

There is a solution to this problem—a meter-based surge suppressor (also called a surge protector) from ProTec Security Systems.

What is a Meter-Based Surge Suppressor?

When an electrical surge occurs at the meter, the meter-based surge suppressor redirects the surge to the ground. The surge suppressor prevents the power surge from entering your home and damaging your appliances and electronics.

A meter-based surge suppressor is your first line of defense against external power surges.

What About Internal Surges?

Occasionally there will be electrical surges from within your home. These surges occur when the air conditioner or other appliances or equipment cycle on and off.

A ProTec technician can perform a survey of your home and recommend how you can protect your expensive electronic equipment with internal surge suppressors.

Surge Protection For Your Business

Homes are not the only buildings that can be affected by electrical surges. Businesses are just as vulnerable. How much damage could occur if lightning hits a power line that feeds power to your business?

ProTec Security Systems can help protect your business from an electrical surge.

Contact us if you have any questions or to request a survey or quote.